WordPress Market Share Sets It on a Path of World Dominance

Today we’re going to talk about the most popular content management system, how it got to dominate the market, and what makes it so successful.

I have rounded up some fascinating facts for you:

Bet you didn’t expect those numbers. Keep reading, I have more prepared for you.

The first official version of WordPress as we know it launched in 2003. It was developed by Matt Mullenweg and Mike Little. Now, 13 years later, it is the most popular website management system. It is offered by practically all hosting companies and quite a few have devised dedicated WordPress hosting platforms with remarkable functionality and security.

But let the numbers do the talking:

This easily makes WordPress the biggest content management system in the world.

This huge percentage of websites using WordPress gives the platform

2. 65.2% of the global CMS market share belongs to WordPress - a 1% increase for this year alone.

Of course, WordPress is not the only CMS in the world. It would be boring without competition.

Other major names include Joomla and Drupal.

Well, I have the answer for you.

The honorary second place goes to Joomla, but their numbers don’t even come close to WordPress’. This particular platform powers 1.9% of all websites currently, which gives Joomla 2.9% of the CMS market share. Third comes Drupal where this figure is at 2.2%.

Quite a notable difference.

If it’s so popular, who exactly is using WordPress?

3. There are more than a hundred popular websites that use WordPress.

Governments all around the world are also big fans of WordPress and use it a lot.

Doesn’t come as a surprise at all.

And it’s the platform’s ninth year in a row wearing that crown.

Which is, frankly, logical.

WordPress is so easy to use. Its installation is quick. There are hundreds of themes you can choose from. There’s also a wealth of plugins you can use and also countless tips, tricks, and tutorials out there.

Heck, it is amazing even for ecommerce, largely thanks to the awesome WooCommerce plugin.

Its biggest advantage would be that it’s free to use. It operates under the GNU GPL license, which, to put it simply, means anyone could download and use it. Anyone can modify the study code freely too.

Admittedly, it did have some security problems back in the old days, but they are now long resolved. With the appropriate due diligence, WordPress is a secure and stable content management system, which gives its users the best experience possible.

WordPress usage is through the roof!

That’s a huge number, people. As I mentioned before, WordPress powers 30% of all active websites. And by that, I mean on the whole internet.

That number is expected to grow, as more and more people turn to WordPress for their sites.

We’re talking about millions of people being involved in this platform.

6. 70 million posts are being published monthly.

To add on, 77 million comments are made monthly.

WordPress users sure seem like a chatty bunch that has a lot to say.

However, that’s not the most interesting part about posts and comments.

According to the statistic posted on the site, those languages include:

Russian, German, Italian, Turkish, and Dutch also make it in the top 10 most popular languages on WordPress. And to help all those WordPress enthusiasts around the world meet and share their experiences, there are

8. WordCamps organized all over the world.

We already established how much of the internet is WordPress.

What about the “outernet”?

The first WordCamp took place in San Francisco, three years after WordPress’s launch. One of the developers, Matt Mullenweg, was the host. Local communities have been organizing the other ones ever since.

Those conferences are basically separate learning sessions about themes, plugins, security, and everything WordPress related.

Are you as impressed as I am? Besides its amazing market share, WordPress seems to build its own realm in real life too.

Talking about WordPress-related things, it’s about time to establish the difference between WordPress.org and WordPress.com.

It’s about who holds the keys to the house or in other words, who’s hosting your website. With WordPress.org you download and install software on your own server. WordPress.com, on the other hand, will host and manage the software for you, without you having to do anything.

WordPress.com is a basic blogging platform which stats off free. However, even simple services like connecting a domain name cost extra, so making a professional site can get quite pricy.

WordPress.org requires you to buy your own hosting, but this usually ends up cheaper in the long run. The cheapest WordPress hosting options cost only a few bucks and you get all the features you would have to pay for with WordPress.com

No wonder WordPress has such a huge market share.

WordPress.org also allows you more freedom with plugins, themes, and when customizing the backend code. It is also absolutely free, thanks to open-source development.

WordPress.com allows you to have your site ready and up on the web for just a few minutes. It does come with a free basic plan, but to get any additional features or to be able to manage plugins, themes, and code as you wish, you will need a paid plan.

Now that I’ve given you loads of raw statistics about WordPress usage to consider, let’s move on to some fun facts.

The Jolly Side of WordPress

10. The name WordPress was suggested by a friend of Matt Mullenweg’s.

It was actually blogger Christine Selleck Tremoulet’s idea to name the platform WordPress. Thanks for the catchy idea, Christine!

It was first mentioned in 2009, during a WordCamp in Tokyo. Its original purpose was to help promote the platform in Japan. And so, Wapuu came to life thanks to designer Kazuko Kaneuchi.

Needless to say, Wapuu turned out to be so cute that the rest of the world just couldn’t ignore it. Now every city involved with WordCamps has its own personal Wapuu. Every time it holds a symbol from the local culture or wears traditional clothing.

The best content management system has to have a worthy talisman, after all.

You can see all of Wapuu’s transformations on the site of the mascot.

12. All WordPress versions are named after jazz musicians.

The developers are jazz fans, so every version since 1.0 carries the name of a famous jazz musician. Some names include Miles Davis, Ella Fitzgerald, Chet Baker, George Gershwin, and Sonny Sitt.

13. The logo was created two years after WordPress launched.

Matt Mullenweg himself had initially designed the first logo. It was just the word “WordPress”, in blue and black, in Dante font. It was mainly just for fun.

In 2005, Matt met designer Jason Santa Maria, who later came to design the more professional look of the logo. Following the newest trends meant giving WordPress a more polished logo. The final version saw the light of day on May 15th and contained the recognizable mark.

14. There is a song about WordPress.

It’s called “Do The WordPress Wiggle” and came to life thanks to composer Zack Katz. It’s really catchy and we’ve been humming it all day. There’s even choreography to go with the song which I may or may have not tried to recreate too.

Hopefully, I’ve managed to catch your interest and tell you something new about WordPress, its market share, the websites that it powers and all the other fascinating statistics had prepared. 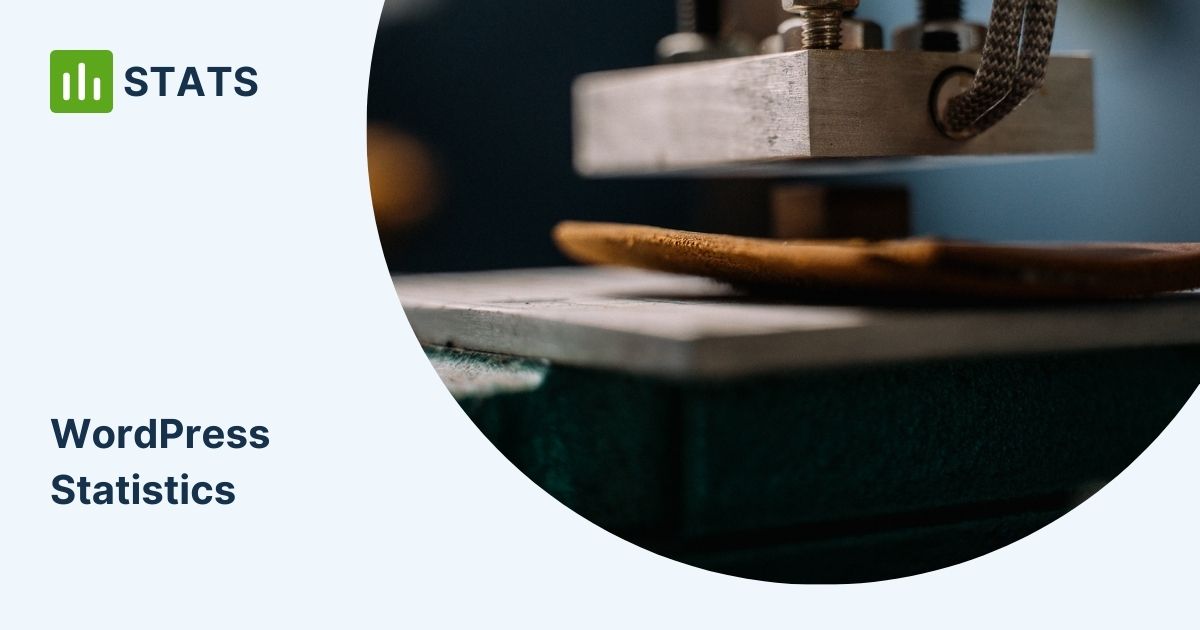