How to Make a Wither in Minecraft?

In Minecraft, the wither is a fearsome mob that can be quite difficult to kill.

However, with the right tools and techniques, you'll take this creature down and reap the rewards!

In this guide, we'll walk you through everything you need to know to build a wither and why you would go through all this trouble. 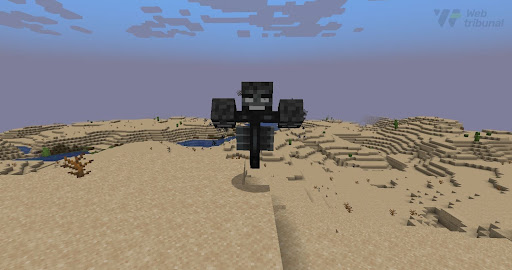 What Is a Wither?

The wither is a powerful triple-headed undead mob that only a player can create. Killing it is the only way to obtain nether stars.

In its complete form, it's 3.5 blocks tall, three blocks wide, and one block thick, so quite big.

The wither has the most health points of all hostile and neutral mobs in Minecraft. It also creates a lot of explosions that deal seven damage, which is more than a charged creeper's attack, for example.

Similar to other undead entities, the Instant Health effect harms it, while the Instant Damage — heals it.

This entity is immune to all other status effects and some particular types of damage — fire, lava, drowning, and freezing.

How to Make a Wither in Minecraft?

If you've decided it's time to take on this creature, you'll need to prepare a few things:

To find soul sand, you have to go to the Nether. Once you're there, look for a dark-colored block with a sandy texture.

The best way to get wither skulls is by killing wither skeletons in nether fortresses.

These mobs have a 2.5% chance of dropping a head when killed. Keep going until you collect three.

When you have everything required, place it on the ground in the following pattern. 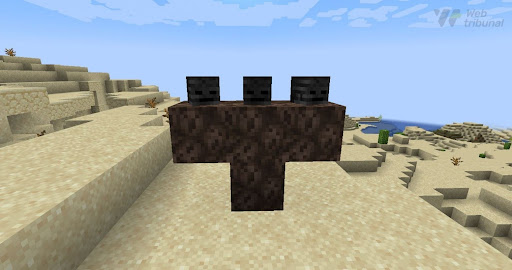 The last piece you add has to be a skull in order to spawn the wither.

Otherwise, you can put the blocks in any direction you want, vertically or horizontally.

Now, let's take a look at what challenge you just created for yourself.

How Does the Wither Boss Behave?

The wither is a hostile mob, meaning it'll attack players and other entities on sight.

When first spawned, it visibly grows in size, and until the transformation is complete, it's invincible, but it also doesn't attack.

It also creates a dark fog that protects hostile mobs from burning in the sun. 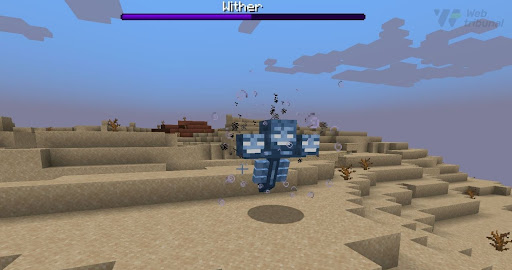 The Minecraft wither has the ability to hover and shoot skulls from each of its three heads, which transmit a creeping corruption on its target.

If it succeeds in killing a mob, a wither rose spawns at the location.

When harmed, this creature creates explosions, destroying every type of block in a three-by-four-by-three area.

However, the MC wither passively regains health every 20 ticks, as well as when it kills.

Moreover, if its health drops below half in Java, it'll gain a "wither armor" effect, making it invincible to arrow and trident damage.

In Bedrock, besides the armor, it spawns three to four wither skeletons and has double the health.

How to Kill a Wither?

So, now that you know what you're up against, let's see how to take it down.

The wither is immune to some forms of damage, so you'll need to use a few tricks.

It's absolutely necessary to craft, enchant, and collect several items to prepare for the fight:

Depending on the edition and the difficulty level, you might need to stock up on more supplies, as this might not suffice.

It seems like a lot, right? Set up a server and have your friends join you for this challenging fight.

Another thing to consider is where to have the fight. It can be in any biome or dimension, so pick carefully.

Even though the End is quite a dangerous place to summon the wither due to the Void, it has plenty of enderman who will become angry and help you kill it.

Regardless, the Overworld is likely the best option.

It's recommended you go underground, as the wither can be very destructive to the surroundings. That will also prevent it from flying off, and you won't have to chase it.

When you pick a site, build a small obsidian base to hide from the flying skulls.

What Can You Use the Wither Boss Drop For?

Congratulations if you have succeeded in taking down the wither.

Although this is a significant achievement in itself, you now also have a nether star as a reward.

This rare resource can be used to craft a beacon that will prove highly helpful in your future adventures.

Knowing how to make a wither in Minecraft is only the beginning of the challenge; you'll also have to kill it.

However, if you follow the strategic tips outlined above, you'll be able to defeat this creature and enjoy the rewards.

Now, get crafting and enjoy the fight!