14 Incredible GitHub Statistics You Should Know

No matter if you’re a programmer or not, GitHub is something you should be familiar with—millions of organizations and developers are building and managing their software on it, which led to it becoming the largest and most advanced development platform in the world. So how does it work?

GitHub is an internet hosting provider for software development and version control with the usage of Git. It offers various useful features, and as of April 2022, it’s the largest code host.

Do you want to know all its ins and outs?

If yes, read our collection of GitHub stats we’ve gathered just for you. 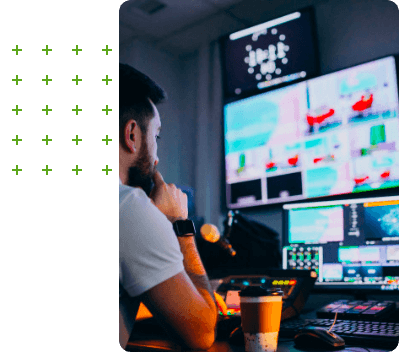 GitHub is a hosting provider that uses Git. So is Git a programming language? Actually, Git is a free open-source program, created in 2005 by Linus Torvalds. In other words, it’s a software for tracking changes in any set of files. It’s usually used for coordinating and collaborating among developers who work on source code.

Now that you know the fundamentals, let’s see how many people use GitHub and what makes it so important:

1. GitHub has over 73 million developers.

The GitHub community continues to grow at a rapid pace. The world’s leading development platform now has more than 73 million developers, 4 million organizations, and 200 million repositories. What’s even more impressive is that over 16 million of these GitHub users were added in 2021 alone. It’s also expected that their count will reach 100 million by 2025. Such high numbers aren’t a surprise—they’re due to the plenty of options that are available on GitHub, such as running actions in any language or operating system.

GitHub is pretty safe, taking the necessary precautions to protect its users and their data. However, devs need to be careful on their own as well, especially when it comes to repositories. If they are not and, say, lose their password, they instantly become vulnerable to hacking. The most important thing is to follow the platform’s guidelines closely—these are so airtight that will ensure your GitHub experience is perfectly secure and safe.

The open source project has 19.1 contributors out of 1,000, which means almost 2% of all contributors are participating in it. It is followed by: MicrosoftDocs/azure docs with 14 contributors, flutter/flutter with 13, first contributions/first-contributions—11.6, tensorflow/tensorflow—9.9, Facebook/React-active—9.1, etc.

4. GitHub subscription plan includes three alternatives you can choose from.

Its paid plans offer upgraded terms of features and are available for the following price: Team—$40/year per user; Enterprise—$210/year per user.

This DevOps software platform, with headquarters in San Francisco, California, is ranked 11th out of the 100 most valuable private cloud companies in the world. GitHub’s funding has been estimated at $436 million with Thomas Dohmke as the CEO.

GitHub is growing at a whirlwind pace. So it’s time we learned more about the team and the success of the platform that is expected to reach a 100 million user base in a couple of years.

According to GitHub company information, the deal’s focus was Microsoft’s desire for open-source development, aiming to increase the enterprise use of GitHub as well as to be able to present the company’s new services and developers tools to a greater audience.

After the deal was finalized, Microsoft’s CEO confirmed that the mutual collaboration of forces aims to strengthen their commitment to developer freedom, openness, and innovation.

Out of those, about 69% are male, while the rest 31% are female. When it comes to ethnicity—62% of them are white, 20% are Asian, 9%—Hispanic, and 9% are from other backgrounds. The GitHub employee count has grown exponentially along with the growth of the platform’s community and revenue.

Why is GitHub so successful? For starters, it’s by far the largest code host in the world. Its success is due to the fact that it provides valuable features to developers from all around the globe, such as cloud storage, all popular programming languages support, streamline for the iteration process, etc. So let’s see what’s trending on GitHub at the moment:

10. The open source projects in GitHub are written in 337 programming languages.

Which means that basically all widespread languages are supported on the platform. It’s not a surprise that the most popular of them all is Javascript. According to GitHub language statistics, out of all its open source projects, up to 2.3 million are written in Javascript, while one million are in Python.

GitHub is a hosting platform for Git repositories, acting like a central location to store and manage code. GitHub repository stats show that at least 28 million of them are public.

The platform also offers an unlimited number of private repositories with GitHub Free. Devs can use the provider for their private projects with up to three collaborations for free. The maximum size of a repository is 10GB.

Is GitHub the most popular developer platform out there? Sure is! It has an immensely powerful community, largest shared repository, easy version control, plenty of integrations, as well as secure cloud storage. So how many users does it have? At least 32 million per month! Pretty impressive… and it gets even grander. These GitHub stats are from 2015, which means that most probably, these numbers have at least doubled by now.

As per Github’s report, more than one third of visitors come from Europe (36%). All in all, the majority of users are located outside the US (74%). Even though GitHub doesn’t have a physical office in Europe, more than 10% of its employees are based in the old continent.

This pattern has been quite evident among new users. The majority of them are commenting on issues, while only about 20% to 30% are creating issues and just 5% of them review pull requests.

Perhaps, our collection of GitHub stats has already convinced of the platform’s value and importance. With its millions of users, repositories, and projects, this web based control system offers numerous opportunities to sync, record, change, and host your code.

Since its launch in April 2008, its growth has been immense. It’s been confirmed by Microsoft’s purchase for the amazing $7.5 billion and various reports of outstanding revenues, user numbers, and projections for the future. We can’t wait to see what the future has in store!