NFT seems to be the next big thing. People talk about it now pretty much like they were talking about Bitcoin back when it cost about a dollar or so. Well, NFT isn’t exactly like Bitcoin, but it seems to be catching people’s attention before they even know what it is.

And here’s where we come in—we’ll tell you all the NFT statistics that you need to know before jumping into the rabbit hole. And we promise to make it as simple as possible.

What Is an NFT?

As to what is an NFT, well, NFT stands for “non-fungible token”.

If that doesn't make things any more clear, don't worry, it sounds way more complicated than it actually is. By the end of this article you will feel like an expert on the topic.

In this case, non-fungible means that this is a token that's not replaceable. You can't exchange it like regular cryptocurrency. It’s basically owning original art but in its digital form. There can be all kinds of copies of it (it’s digital, after all) but you’ll be the sole owner of the original piece.

Now that that’s out of the way, let’s get started.

First off, let’s clarify a few of the most common NFT misconceptions.

NFTs aren't exactly cryptocurrency themselves, but most of them are part of the Ethereum network. Ethereum is a blockchain technology that supports NFTs. Other blockchains can have their own versions of NFTs, though.

Much like any other form of art, you should start by creating your digital masterpiece. It could be a picture, painting, autograph, music, video, meme, a gif, an avatar, etc.

You should make sure, of course, that you own the copyrights to your art and that you have a crypto wallet. Oh, and looking up some NFT statistics about similar pieces before entering a marketplace is also a good idea, so you know what’s what in advance.

Then you should choose the marketplace where you'll sell your art. Each marketplace has its own admission and approval process, but oftentimes it’s as simple as uploading your item, setting a price, and keeping your fingers crossed.

Most NFTs are Ethereum-based tokens, so if you want to buy an NFT, you better get your crypto wallet running and buy some ETH first. Then, find a marketplace like OpenSea or Metamask (plenty of choices there), and buy the NFT you want.

Just be careful, it's weirdly addictive.

Believe it or not, this is one of the most frequently-asked questions about NFTs. But yes, NFTs are halal. They are just cryptographic tokens on a blockchain.

5. Are NFTs bad for the environment?

How could something completely digital be bad for the environment?

Well, unfortunately, it could.

NFTs are part of the Ethereum blockchain, and people use a huge amount of electricity to mine for cryptocurrencies. One single NFT exchange is equivalent to more than 140,000 credit card transactions, in terms of carbon footprint.

However, Ethereum is planning to change that in 2022. The promised shift would mean a 99% cut from the network’s current energy consumption.

A survey from March 2021 concluded that about 20% of Americans are somewhat interested in NFT, whereas 9% claimed to be very interested in the subject. These are pretty rough NFT statistics, but it’s truthfully hard to tell what the real numbers are.

We could bet, for instance, that at least some people thought NFT has something to do with the NFL. After all, Tom Brady also sells NFT on his platform “Autograph”, which may cause some confusion—though one can only wonder if the quarterback’s NFT stats will ever be as good as his NFL stats.

7. China is the number one country for NFT searches.

China has the largest population on the planet, so it's not really a surprise that they are the top country searching for NFT. They are also the world champion in Bitcoin mining.

Next in line on the list of potential NFT buyers by country are Singapore, Hong Kong, and the Philippines. Canada, on the other hand, is the champion of NFT searches in the Western world, followed closely by Australia, the US, and New Zealand.

8. Over 40% of UK and US millennials claim they’ve bought an NFT.

Well, who wouldn’t like to go from NFT millenials to NFT millionaires?

If these numbers are correct, then four out of every 10 of your British and American friends in the 25-40 age-group are NFT buyers—which also means that NFTs are not just a Gen Z fad.

That said, it's still pretty hard to tell what the real numbers for GenZ show because most studies don't include people under the age of 18, and nothing really stops them from buying NFTs.

In fact, teen artists are already making millions from their art. Just as an example, a 15-year-old guy bought a digital artwork for about $300 and sold it for $30,000 (both were Ethereum transactions, of course).

So, it’s probably best to take all statistics about NFT buyers by age with a pinch of salt.

The NFT Market: What You Need to Know

9. You can build your own marketplace as a seller, but it might be more feasible to partner with a third-party platform.

When you're streaming music and movies on Spotify and Netflix, you don't own the rights to said music and movies—you're literally renting them. An NFT marketplace, on the other hand, acts more like a real-life art gallery. You own the digital art, and the platform just takes a cut from the sale.

The marketplaces can be either streamlined or augmented (i.e., highly specialized), but we'll talk more about where NFT sellers can present their art in a minute.

It seems like this is just the beginning, though. There’s a growing demand for NFTs, and an increasing number of artists who are just getting into the system, which makes us think the NFT market growth will be even more impressive in 2022.

That said, we all know that anything that has to do with blockchain is pretty unpredictable and volatile, so it’s probably best to proceed with caution.

People were ready to say NFTs were dead after they skyrocketed in the beginning of the year only to plummet a little later—but NFTs aren’t dead, they’re just breaking new records.

Taking a look at the numbers, the NFT market size was at about $10 billion by the end of Q3 2021, and surged again just a month later. For the better part of the year, NFT sales have been around $10-20 million, with some weeks here and there reaching up to $170 million—as we said, volatile.

12. The most expensive NFT collection sold for $532 million.

Before that, the record-holder was Beeple, who sold an NFT collection for $69 million back in March 2021. Just for comparison, some of Van Gogh’s and Renoir’s paintings sell for a tiny bit more than that.

Does that make artists like Beeple just as great?

We wouldn’t go that far. Still, Beeple and CryptoPunk boast most of the top 10 most expensive NFTs sold, which means that (at least) someone really values this type of modern art.

In Cryptopunk’s case, though, the whole deal was a bit shady, so we're not ready to say their NFTs are the best just yet.

13. OpenSea boasts a total trade volume of over $6.5 billion.

If you're looking for a place to make an NFT exchange, you should know OpenSea is the biggest marketplace for NFTs at the moment. OpenSea's trading volume increased dramatically (by more than 800%) in Q2 of 2021.

What’s great about OpenSea is that you can put your NFTs for sale there without paying any charges. If you actually manage to sell them, though, there's a 2.5% fee. Seems pretty fair, right?

If, on the other hand, you’re interested in buying, you’re free to check out all the existing OpenSea NFTs and choose the one you like—maybe you’ll even find one that doesn't cost 5,000 ETH.

We wouldn't be surprised if you thought about Banksy a couple of times while reading this article. Well, his 2006 piece, Warning Sign, was reimagined as a piece of NFT art now.

There's a slight twist in the NFT, though—when rotated, the plane (which symbolizes the one that hit the twin towers in New York) turns into doves.

15. NFT gaming is a thing—and some games have more than 750K users.

The most popular blockchain game right now is Alien Worlds, which is like an NFT metaverse where you can play with your non-fungible tokens.

The way it works is a bit complex, but it gets easier the more you play. In the game, you can use the NFT blockchain, earn an in-game currency called Trilium, and travel on Alien World missions to a variety of planets.

16. During the last NBA season, fans spent more than $230 million on NBA-related NFTs.

The NFT collided with sports—not just the NFL, but the NBA, too. Top Shot is a new way to get licensed NBA NFTs. The most expensive one to date is a Lebron James highlight that sold for over $200,000.

What does it mean for these NFTs to be NBA-licensed?

It means that you own the NBA highlight you buy, but you cannot alter it in any way or make copies of it. The only thing you can do with it (apart from holding it) is selling it in a non-commercial setting.

It’s early to say if NFTs are going to be the next big thing, or if they’ll crash and burn in the following months. It’s a volatile market that’s constantly bringing about new changes and pushing its own limits.

So, be sure to keep an eye on the latest NFT statistics, follow the trends, and invest wisely.

Crypto Stats
Apr
13
A 2022 Beginner’s Guide To Crypto: All You Need To Know About How And Where Bitcoins Are Mined! 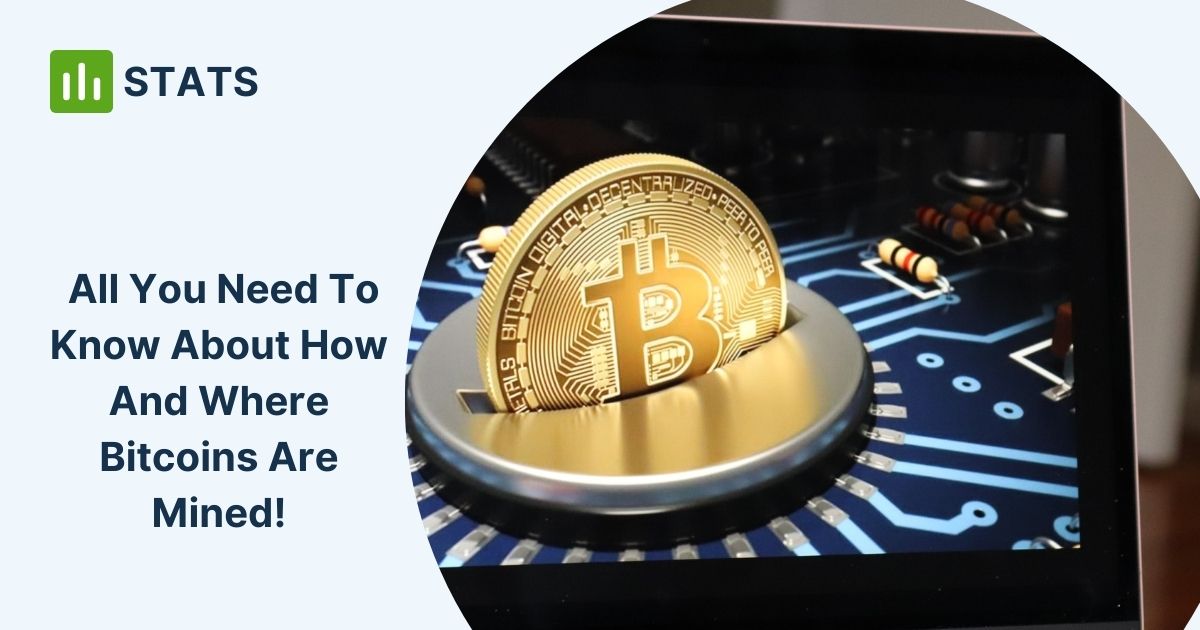