How To Sell on Facebook Marketplace for Beginners—A Simple Guide

eCommerce is a big, bold new frontier, but that doesn’t mean you have to be a budding titan of industry, or a plucky young start-up entrepreneur to get in on the action.

There are smaller avenues available for small sellers that just want to get rid of an item or two that are taking up space, or perhaps make a little money on a craft hobby.

Today we’ll be looking at how to sell on Facebook Marketplace for beginners.

Facebook Marketplace is an online platform that allows users to buy and sell items to people mainly in their local area.

You can sell over a distance too, but most people use it as a type of CraigList, and stick to secondhand items.

In order to use it, one needs to be an existing Facebook member, and either access the social network from a desktop, or a mobile app.

One way in which it differs from other ecommerce platforms is that it doesn’t charge listing fees to people selling as individuals.It doesn't charge business fees, but that’s for an entirely different topic.

Many people wonder what the difference between Facebook Marketplace and buy/sell groups is.

The simple answer is that they exist alongside each other, with buy/sell groups being limited to small areas, and often doing business through the Facebook Marketplace.

Buy/sell groups are privately maintained and limited to a neighborhood, town, or sometimes a niche hobby.

First, you have to go to the marketplace from your main feed. 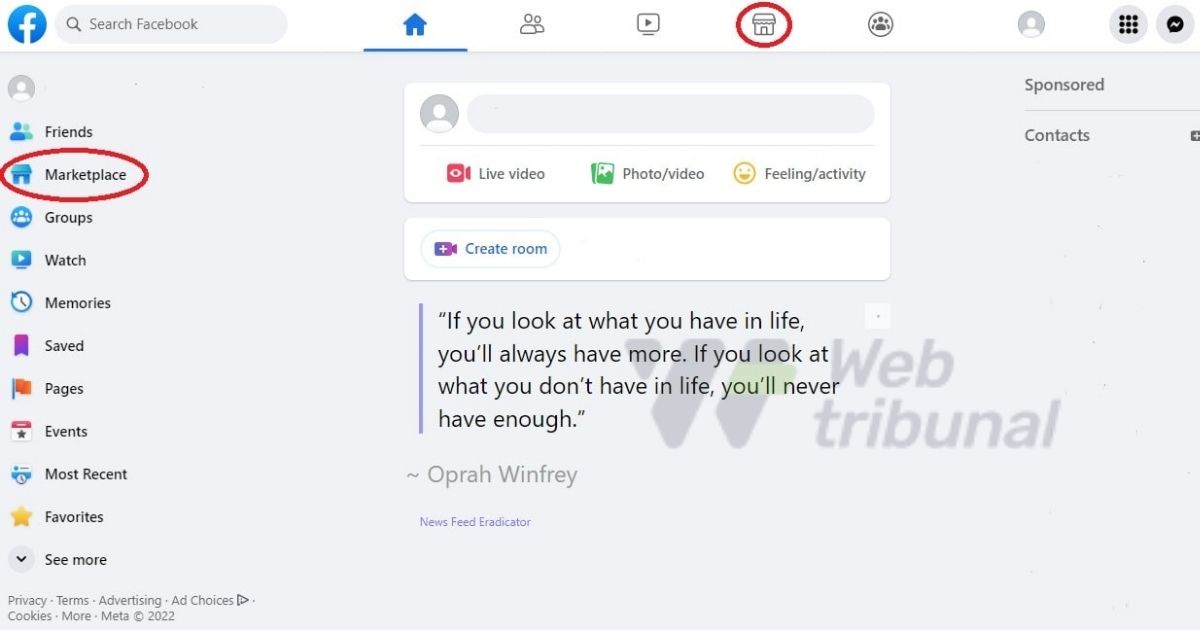 If you have a FB account, you’re already authorized to do basic selling, so there are no extra steps involved account-wise.

Next, it’s time to select the category the item you’re listing falls into: 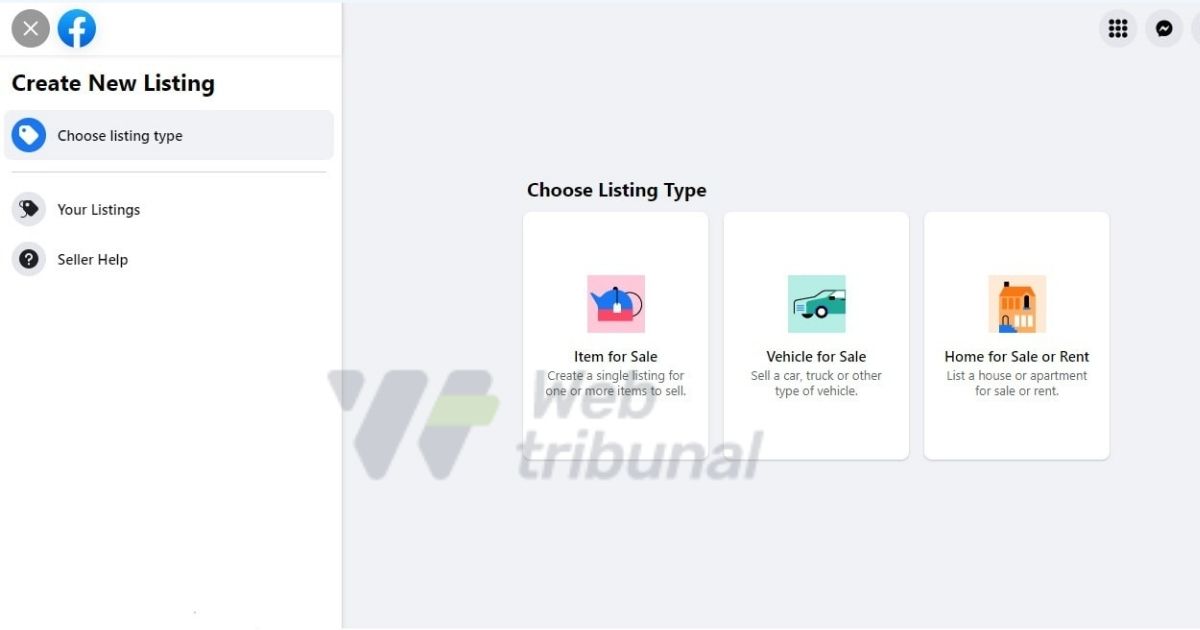 When selling stuff on Facebook, you select one of three categories—items, vehicles, and homes for sale or rent.

The process for listing each item is mostly the same. The only difference is how many images you’re allowed.

Items can have ten images attached, vehicles can have 20, and properties can have 50. Note that Facebook forbids “before and after” images of how a product might work. You can only list photos of the item itself. 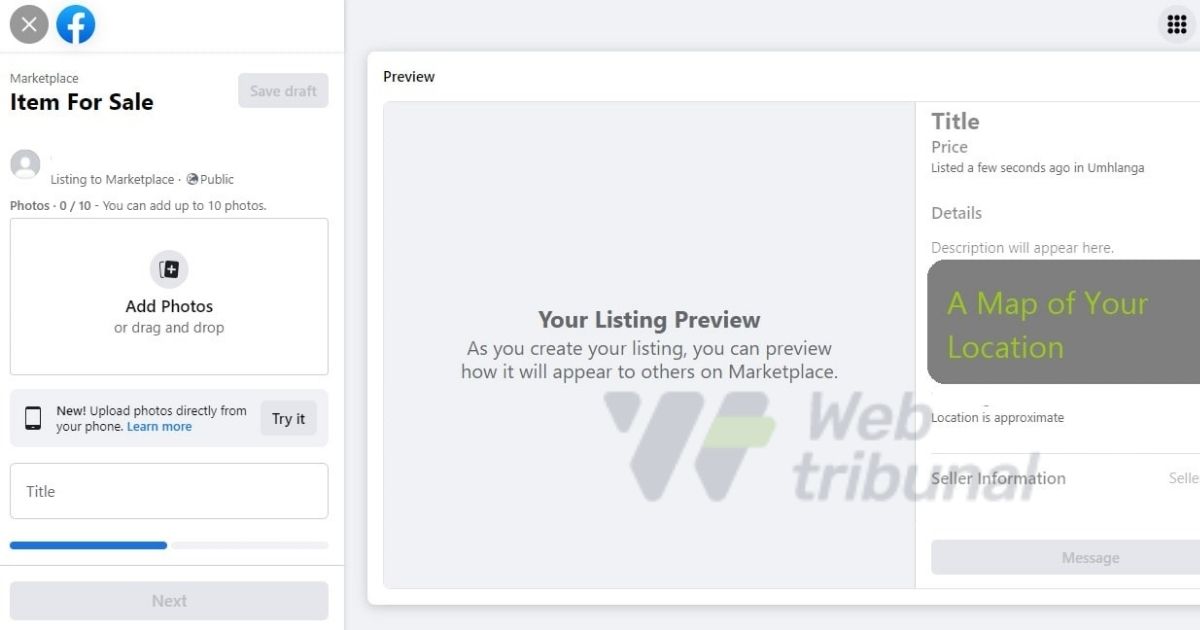 Here you’ll add images to your post on Facebook marketplace, to show off the item, and write a title and description.

In order to maximize your reach, it’s advised that you make use of SEO resources. It’s important to be accurate too. Facebook will reject your listing if the item and the description conflict.

Also note that while you can expand the size of the area your offer will be advertised in, most people using the marketplace will only be interested in things available near them.

If you’re worried about privacy, you can also choose to hide your listing from anyone on your friends' list.

Selling on Facebook Marketplace is an easy and convenient way for anybody to operate on a small scale. It’s similar to eBay in some ways, but with less of a setup process, as it requires nothing more than a Facebook account to function.

It can also be a great way to get an introduction to ecommerce, because it’s free, and gives a basic feel for how online transactions play out.

While the platform can be a great way to buy and sell items, especially seeing as there aren’t any Facebook marketplace fees, there are also some downsides to consider.

One of the biggest dangers of using Facebook Marketplace is that it's easy to become a victim of scams. Deals after often done in cash, and anyone can make a Facebook account.

Besides that, there’s a greater possibility of being paired with unserious buyers who may waste your time.

Plus, you won’t be building a brand on Facebook Marketplace. It’s simply a convenient way to start small before moving to something bigger, whether that be Facebook for business or something like dropshipping on Amazon.

There you have a crash course on how to sell on Facebook Marketplace for beginners.

It’s a simple way to sell to individuals, especially if they want to keep things local and save on costs.

While it has some downsides, that’s mostly due to the nature of the tool.

It’s only but a single ecommerce solution in an entire ecosystem of them.