How to Make a Pickaxe in Minecraft?

In Minecraft, the pickaxe is perhaps the most important tool you can possess.

It allows you to mine, chop down trees (even though an ax is a better option), and destroy other blocks and items.

Below, we'll show you the Minecraft pickaxe recipe, step by step, and how to upgrade to higher-tier tools.

What Can You Do With a Minecraft Pickaxe?

When you start playing Minecraft, a pickaxe is one of the first items you'll need to survive.

With it, you'll break and collect more efficiently the resources required to build a shelter, feed yourself, and fight hostile mobs.

You'll find out soon enough that destroying things by hand takes forever, and it's tiring for your character. So, you'll want to craft this tool as quickly as possible.

There are six types of pickaxes in the game: 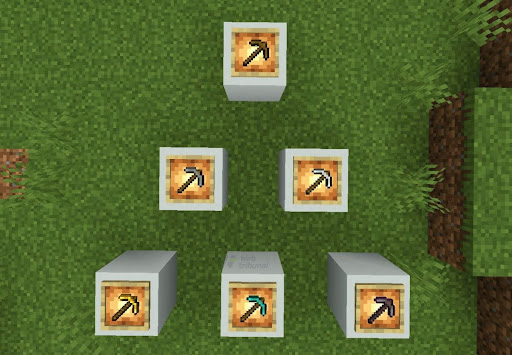 However, you'll have to rely on a wooden pickaxe initially. Making that one is the first step to crafting the rest, as you'll need it to collect the materials.

You may set up your server and get your friends to join you so that you can help each other in this new world.

While the wooden pickaxe in Minecraft does a good job, eventually, you'll see that certain blocks can be broken only with higher-tier tools.

So, you'll have to craft those too.

Furthermore, each one in the list is faster and more durable than the previous, so that's a bonus you'll want to get.

Overall, there's no way to play the game without a pickaxe, so let's get crafting.

How to Make a Pickaxe in Minecraft?

That's a straightforward process that only requires one material.

You'll have to break by hand any kind of three you see around you — oak, spruce, birch, jungle, etc.

For now, you won't need more than two logs.

Place the logs in your two-by-two crafting grid to produce planks. 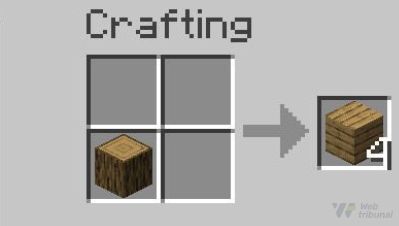 From every piece of wood, you'll get four planks.

Then, put two planks, one above the other, to make four sticks. 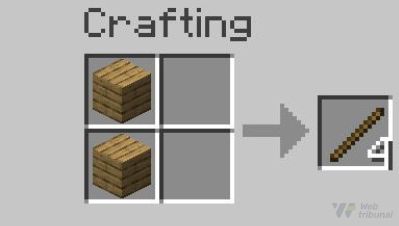 Place one plank in every slot of the crafting grid, and you'll get this essential block. 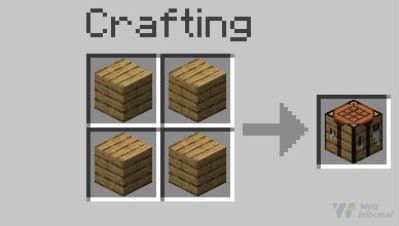 Put the table on the ground and open it.

You'll need to arrange the sticks and planks in the following pattern:

That's it; you just made your first pickaxe.

How to Upgrade Your MC Pickaxe?

Now that you have what to mine with, you can start collecting the resources to craft a better pickaxe.

The recipe is identical to the one outlined above, only that you'll need cobblestone instead of planks.

Cobble is among the most common materials in the game, so look around you, and you'll likely find some very soon.

Gather three blocks, and you'll be ready to proceed.

Open your crafting table and place:

Now, things are getting a bit more complicated.

First, you should find iron; it's usually underground, so look for gray blocks with pinkish specks when mining. You'll need three.

Then, you have to find or make a furnace and power it up with fuel — coal, charcoal, or wood.

Smelt the iron ore into ingots, and you can move to the next step.

Place on your crafting table:

Even though it may not look like it, this pickaxe is stronger than iron.

It can mine blocks faster and lasts longer before breaking.

Again, you'll have to mine underground to find gold ores.

However, you need to make an iron pickaxe in Minecraft to break them and collect the raw gold.

It won't drop anything if you use a wooden or stone.

Keep mining until you have three ores. Then, smelt them in a furnace to produce ingots.

Afterward, the recipe should be familiar:

That is the best pickaxe you can make with materials from the Overworld.

It mines very quickly and is also quite durable, so you won't have to replace it anytime soon.

You guessed it; diamonds are only found underground. They usually don't spawn near the surface, so you should go a bit deeper to find them.

When you do, you'll need to craft a pickaxe from iron or gold to mine them.

Once you collect three diamond ores, smelt them in a furnace to get diamonds.

Then, put on your crafting table:

For this end-game tool, you'll have to go to the Nether.

Netherite is a rare ore that can only be found there, and you'll need a pickaxe made from diamonds to mine it.

When you obtain a netherite block, place it on your crafting table to get nine ingots.

Then, find or make a smithing table and put a Minecraft diamond pickaxe in the first slot and a netherite ingot in the second.

That way, you'll get the strongest and fastest pickaxe in the game.

How to Repair Your Pickaxe in Minecraft?

There are two ways to do it.

The first one is to combine two damaged pickaxes on a crafting table or anvil.

Alternatively, you can place the tool in the first slot of an anvil and the material it's made from in the second.

Every resource you put in will recover 25% of its maximum durability.

If you are just starting out in Minecraft, it's important to learn how to make a pickaxe.

It'll allow you to gather the resources you need to survive and build other items and structures.

Once you have a pickaxe, you can explore the world and build your own creations.