How to Grow Mushrooms in Minecraft?

Mushrooms are fungi that spawn in various biomes in Minecraft.

They come in different shapes, colors, and sizes, so you can take your pick.

Below, we'll explain how to make an efficient mushroom farm and what you'll be able to make with all you harvest.

What Types of a Mushroom Farm in Minecraft Can You Make?

While the world of Minecraft may be blocky and pixelated, it offers a surprisingly rich and diverse ecosystem for players to explore.

That includes a variety of mushrooms, which can be found in shady areas around the dimensions.

In terms of color, they might be one of two shades — red or brown. Additionally, they're either small or huge, but you'll be able to farm them all. 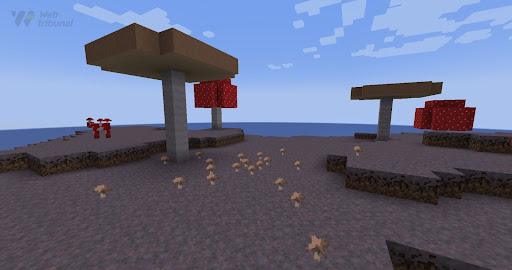 When you mine a giant Minecraft mushroom, you'll gather at least 20 small ones, so that’s something to consider.

The smaller sorts are found on the surface of swamps, old-growth taiga, and mushroom field biomes in the Overworld and virtually everywhere in the Nether.

As for huge ones, you'll only come across them in mushroom fields.

And if you are a shroom aficionado, you can set up a Minecraft server and cover the world in mushrooms.

What Do Mushrooms Grow On in Minecraft?

You have to consider a few factors before you start building your farm.

First, they'll only grow on fully opaque blocks, meaning they can't be placed on or next to a fence, trapdoor, or slabs if you want them to spread.

Then, you'll need to prepare dirt, grass, podzol, mycelium, or nylium blocks to plant the fungi on.

Keep in mind that podzol, mycelium, or nylium increase your chances of successfully growing mushrooms in Minecraft.

Depending on the size of the mushrooms you want to harvest, you'll need a different amount of the chosen soil.

How to Grow Mushrooms in Minecraft?

Your mushroom farms can be as big as you want, but you should always keep a few things in mind, as these plants require specific conditions to be cultivated.

As we discussed above, it's best if you obtain podzol, mycelium, or nylium, but regular dirt and grass blocks would do the job as well.

In the Overworld, podzol is among your best options for mushroom farming in Minecraft.

To make some, you have to plant a giant spruce tree using four samplings, wait for it to grow, and cut it down.

The soil below the tree would turn to podzol. You can do that as often as you need.

On the bright side, mushrooms don't require access to water or extra space around them like some other crops.

Growing mushrooms in Minecraft is only possible on blocks where the light level is below 12.

So you should build some kind of shade for your plantation. If you need to use a light source, a soul lantern that emits a light level of ten is a perfect choice.

That way, hostile mobs won't spawn on your farm, you'll be able to see inside, and the mushrooms will spread.

However, if you use mycelium or podzol, the light doesn't matter.

Keep in mind that both brown and red mushrooms will spread in all directions, including diagonally, given the surrounding blocks are empty and opaque.

New fungi will only grow if you have fewer than five mushrooms of the same variety in a nine-by-nine-by-three area around the original one.

So if you plant both variations, you may get ten new mushrooms in that space instead of just five.

4. Wait for Them to Spread

It might take a while for your new crops to appear, so load up on patience.

Every time an MC mushroom receives a random tick, there's a 4% chance that it'll try to spread.

Whether it would succeed depends on the conditions outlined above.

How to Grow Giant Mushrooms in Minecraft?

Most things required to farm huge mushrooms are similar to those for their smaller counterparts.

Let's see how they differ.

Again, choose whether you want to use dirt, grass, podzol, mycelium, or nylium blocks.

The light level for these Minecraft mushrooms must be below 12 unless you use mycelium or podzol.

In that case, it's best to plant it outside so it can grow as much as possible.

On rare occasions, the mushroom could reach over 11 blocks in height.

You'll need to free up an area of at least seven by seven by eight blocks to plant a mushroom in Minecraft that will become so huge.

Three blocks next to the stem in every direction must be empty.

Now, you'll have to use bone meal to make a regular mushroom into a huge one.

The chance it would grow extra tall is less than 5%. 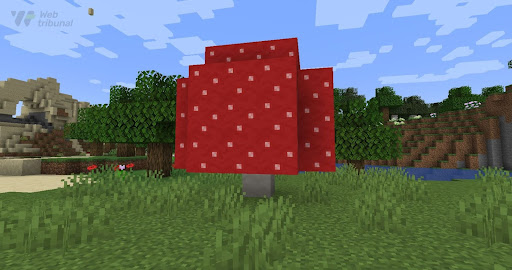 What Can You Use A Mushroom Farm in Minecraft For?

Once you get a steady supply of mushrooms, you'll be able to produce as much as you want of the following items.

That is a brewing ingredient for several potions — of Weakness, Harming, Slowness, and Invisibility.

To make it, you'll need to place the following on the crafting table:

This food item can restore quite a few hunger points, so it's good to have it at hand.

Put in the crafting grid:

This tasty meal requires a bit more materials, but it's worth the effort.

You'll also need a furnace or smoker to prepare the meat.

As the name gives away, this food item can surprise you with a negative status effect. Then again, it's quite nutritious and may also give you a positive boost.

Knowing how to grow mushrooms in Minecraft can give you an endless supply of brewing and cooking ingredients.

Not to mention, the giant mushrooms look really cool.

So, give this a go the next time you're up for a farming challenge.